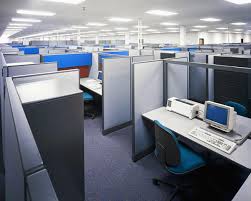 It’s unfortunate that the cubicle has become a symbol of drudgery. The reason for this is because when it was first designed in 1968, it was really a way for employees to enjoy freedom.

The story behind the ‘cubicle’ has been chronicled well in a book penned by Nikil Saval and titled ‘Cubed: A Secret history of the Workplace’. As the book informs us, the cubicle was originally called “The Action Station II” and designed by Robert Propst.

He wanted to create a workstation that gave people freedom while giving them the ability to work in a number of different settings.

At first, the adjustable walls were meant to kept at a 120-degree angle. This was to ensure that they would enjoy privacy when needed but would also allow them to communicate with coworkers when the need arose.

Inside the workstation itself, the Action Office II had pushpin walls that could be personalized. In other words, people could make use of several levels of shelving as well as a sitting and standing desk.

The idea behind this was to give workers a flexible space so that they could move between collaborative and individual tasks quite easily.

This particular design, produced by the office furniture company called Herman Miller, was met with critical acclaim. In fact, a New York Post column wrote about the design in an article titled ‘Revolution hits the office’.

Unfortunately, companies were interested in saving money rather than providing their employees with flexible working arrangements. As soon as they figured that they could save space by positioning the walls into a box-like shape, that’s what they went ahead and did.

A number of other companies began to copy the design but they marketed them as the small and closed boxed that we’re all familiar with.

Three years before Propst passed away, he told The Times that his design of the Action Office II was to “give knowledge workers a more flexible, fluid environment than the rat-maze boxes of offices”.

The tragedy was that he had to denounce the work that he considered his greatest creation, thanks to the intentions of corporations to cut costs.